This tool was developed for an application that used a six-axis robot with a 10kg payload capacity for carton packing at the end of a line. Avoiding interference with the sides of the box required placing the payload’s center of gravity (COG) a significant distance away from the faceplate of the robot. As with all six-axis robots, payload capacity is considered in terms of inertia instead of mass. As the distance of the COG from the faceplate increases, so do the moments of inertia exerted on the robot’s wrist. While this particular model of robot is rated at a 10kg payload, placing the COG almost 16 inches off the faceplate effectively reduces that capacity down to 2kg. With the payload itself weighing in at 850g, there was absolutely no room for error when designing our tool. The only way to overcome these severe limitations was to develop a design using the extremely lightweight yet strong material of carbon-fiber.

As DevLinks, Ltd. does with every six-axis end of arm tool that we design, mass properties were determined using SolidWorks design software. This allows us to check payload before we invest time and money having parts manufactured. The end result for this particular project was a tool that was extremely strong while still managing to be under the total payload capacity of the robot. Staying within the payload parameters of the robot means that our customer still has the benefit of a manufacturer’s warranty, and also extends the useful life of the robot. 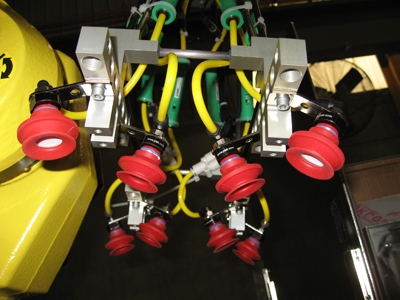